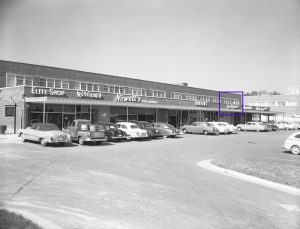 Kenneth and Bryant Dickinson, brothers and co-owners of HMD Construction & Development, are eighth generation natives of Wake County. Their documented family history extends back to the early 1740s on their mother’s side with the Olives and Carters from the Apex/Holly Springs area; this history will be posted soon! In addition, their father and paternal grandparents contributed greatly to the growth of Raleigh over the last 80 years.

Kenneth and Bryant’s grandfather, Dr. Kenneth Dickinson, aka “Dr. D,” was one of the only obstetricians in Raleigh during the 1940s. Initially partnering with Dr. Ivan Proctor, he later opened the first stand-alone medical office building in Raleigh, on the corner of St. Marys and Tucker Street.

Their grandmother, Genevieve “Jean” Dickinson, opened one of the first shops in Cameron Village back when it was the only shopping center between Washington DC and Atlanta. Jean Dickinson Gifts and Decorative Accessories was located near Nowell’s, Burton’s, and Village Pharmacy (which later became Kerr Drugs). Jean traveled to High Point, New York, and other regions to provide her clients the very best in interiors.

Kenneth and Bryant’s father, Kenneth Dickinson II, aka “Dockey,” worked with top developers and founded Dickinson, Logan, Todd & Barber, Inc, a commercial mortgage brokerage firm with multiple offices in the Southeast that provided financing for and investments in many buildings and projects that continue to grace the Raleigh skyline as well as other cities throughout the southeast.

Today, Kenneth and Bryant specialize in commercial fit-up, renovation, new construction, and development services in the greater Raleigh-Durham/Triangle area of NC, adding to the rich history of their family by assisting new medical practices and retail stores as well as a wide range of other businesses. Kenneth and Bryant are proud to build upon their family’s strong foundation. Visit HMDConstruction.com to learn more.

I wanted to thank you for the exceptional expertise and contributions that you have contributed toward getting the marketing and sales program for our new company “kick started”. Despite the nearly 20 years that we have worked together, I am still amazed at how quickly and professionally you can grasp a concept and come up with an outstanding marketing or sales piece. Your talent in this area is unparalleled.

I just wanted to write you and thank you for all your help with our MAME entries this year! You are an awesome source and really respected for your input. What a difference you made in our entries. Seriously, Rebecca, thanks so much for your help! You are the BEST!

We consider Rebecca Newsome and Constructive Marketing an integral part of our business growth. Rebecca’s expertise and creativity have been instrumental in creating marketing materials that convey the polished, professional image that we believe is necessary in order to connect with new clients.

Rebecca has helped us with real estate marketing since 2005. I have worked with her in two new home sales communities and she has also helped my husband and I with our individual business writing articles for the local papers and journals. We always get more traffic on our listings once she has written her awesome articles for us. She has tons of contacts in the business so is able to find whatever it is you need for marketing your business. She is professional and working with her is a joy!

I have known Rebecca Newsome for years now – first as a member of a marketing organization in the Triangle as well as working with her on several projects where we have needed professional articles written which required in-depth knowledge of the promotion and community. Rebecca delivers first class work every time and I’m thankful to have her on our team of professional resources.

Rebecca has helped us greatly in launching our new business, HOCOA Triangle. She wrote up our grand opening press releases and had them published in numerous venues; from newspapers, magazines and online media sources. She also has introduced our company to many of her associates and contacts which propelled our company’s presence and name recognition. She is an incredible asset for any company that requires marketing support.

I’ve been working with Rebecca Newsome of Constructive Marketing for all my Real Estate Development projects over the past 10 years. The personal interest she takes in each project provides me with the confidence that she is vested in my work. She understands my needs and goals, and is timely and extremely resourceful in developing a program that I am proud to bring to the public. I wouldn’t think of using any other company.

Rebecca has worked on many projects for me over the last ten years. She has always delivered quality, timely work and importantly–within budget. She has a unique understanding of our business and ability to capture the essence of our needs. Our company will continue to use her talents and will highly recommend her to others.

Rebecca has worked on countless projects for Preston over several years. She is the most professional, articulate and deadline conscious writer and marketing expert I have worked with. I have recommended Constructive Marketing to others and will continue to do so with full confidence in Rebecca’s ability to deliver!

I have worked closely with Rebecca on many projects over the last 12 years, and have found her to be very professional, creative, and detailed. It is a great comfort to know that I can count on her abilities and know she will come through for me with a quality product.